skip to main | skip to sidebar

Poetry Boxes are a hybrid of origami and poetry that I invented in 2001. They're based on an 18th-century Japanese paper-art form called temate baku, or "surprise box." Each box is made of six individual panels pre-printed with text that, when assembled, form a complete poem. The title is printed on the top; the poem is read by turning the box clockwise. 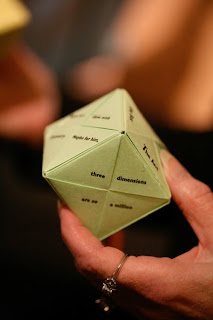 It took me literally months to work out the template.

The poems are written specifically for the boxes, and they're often about physical and psychic confinement, architecture, and -- I am somewhat at a loss to explain this -- religion. Each is, by necessity, eight short lines. Here's one:

What Goes On Inside a Box?

A quiet, closet
life. A universe
inverted. The hollow
sound of space:
the dark debating
whether God is in there,
and if so, what
could be outside. 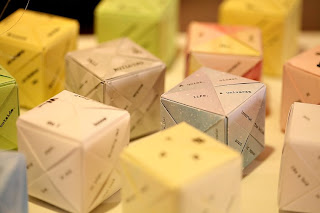 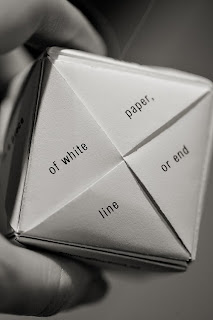 The Ant Crawls Around the Box


Poetry boxes have been featured in exhibits at Gallery DeForest and Gallerie Karon in Ashland, Oregon. I'm continually finding new paper colors and textures and adding poems, so it's fairly safe to say that no two are alike.


I always like to mention that I invented this box design—and some other three-dimensional poetry forms—when I was unemployed back in 2001–02. I got laid off right after the 9/11 attacks, and for a few months I had lots of time on my hands. I've worked full time pretty much since I was 17 years old, so it was a rare opportunity to wake up each morning, think about creating things, and then just go create them. It was a glimpse into utopia, at least in the moments when I could see past the job-hunting anxiety and the fear of being homeless. A few years ago, my journalist friend Angela Decker wrote an article about the poetry boxes in the Ashland Daily Tidings. She title it "Unemployment as the Mother of Art."

*Alas, there is nothing in the box. Some later generation may be openable, but adding a hinged lid makes them too flimsy. And they're dangerously close to tchotchkes already. So for now, they're storage boxes for notions -- the idea kind, not the sewing kind.

If you'd like to know more, please e-mail me at amymillerediting[at]gmail.com.

And many thanks to Megan Boone for the wonderful photos.

Posted by Amy Miller at 1:08 PM No comments:

Amy Miller
My writing has appeared or is forthcoming in Barrow Street, Copper Nickel, Gulf Coast, Nimrod, Rattle, RHINO, Tupelo Quarterly, Willow Springs, ZYZZYVA, Fine Gardening, Asimov's Science Fiction, and many editions of the Poet's Market. My full-length poetry collection The Trouble with New England Girls won the Louis Award from Concrete Wolf Press, and my latest chapbooks are I Am on a River and Cannot Answer (BOAAT Press) and Rough House (White Knuckle Press). I won the Cultural Center of Cape Cod National Poetry Competition, judged by Tony Hoagland, the Jack Grapes Poetry Prize from Cultural Weekly, and the Earl Weaver Baseball Writing Prize from Cobalt Review, and have been a finalist for the Pablo Neruda Prize, the 49th Parallel Award, and prizes from Radar, Atlanta Review, Tinderbox, and others.